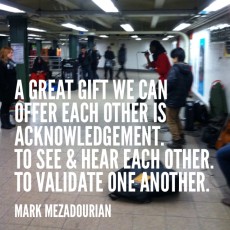 In 2001, I attended an event in which Robin Williams was being interviewed. Eventually he abandoned the formal interview and began to brilliantly improvise for the audience. We were all in tears from laughing. His genius was astounding. At the end of the program, he came down to the front row, where I was, to greet us. He was very humble as he did … END_OF_DOCUMENT_TOKEN_TO_BE_REPLACED